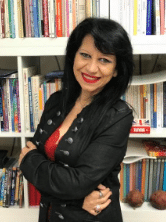 Giohà Giordano, born in Foggia on November 6, 1958, lives in Santa Marinella in the Province of Rome, Italy.

Giohà has been a medium since birth and this allowed her to explore the invisible world and experience the phenomenon, later her exploratory nature led her from a young age to deal with the fantastic Quantum World experimenting with communication with many realities. invisible to the human eye but real in their world. Thanks to a long personal and professional study she has become a certified Holistic Trainer, Coach and Hypnologist.

She is a teacher of art and an inspired painter since she was a child, for Giohà channeled art is a means of healing for human disharmony; his works become mantras, painted symbols and archetypes, connecting keys that help awaken spiritual and personal talents.

Quantic Power Mediumship® by Giohà Giordano, trademark registered at the UIBM on 22 September 2017

December 2017, collaboration as a trainer with The Monroe Institute for the Going Home course

Quantic Power Mediumship® by Giohà Giordano, trademark registered at the UIBM on 22 September 2017

Ravenna, September 2015, I and II and III level Matrix 2 Point with Andrea Rommel.

In 2011 his SalutoGenesis techniques were registered and protected under their “Genesis®” trademark.

Certified facilitator of “Family Constellations” of the Non-Therapy School and of the AISCON agency.

Level III The Reconnection®, with the same teachers as the two previous levels.

Operator certified by Dr. Eric Pearl for the “The Reconnection®” method

Giohà studied the Art of Tarot as a way of inner harmonization according to the method of Alejandro Jodorowsky.

He is a Theta Healing practitioner.

He perfected his shamanic training with BholaNathBanstola (Nepalese shamanism) and later with Fabrizio Caspani of the Lorenza Menegoni School, Russian shamanism at the Orphic International Academy and last but not least the experience with Marie NoelleUrech; Itzhak Berry.

1995 he experienced Rebirthing and practiced ReikiRealRadianceTechnique I, II and III level.

She works in Italy and abroad as a Medium, Trainer, Holistic and Transformational Coach and Hypnologist.